VANCOUVER, British Columbia — Biamp Systems, a leading provider of innovative, networked media systems, today announced that its Devio® technology will be powering the connection between Shared_Studios’ Portals at TED2017 in Vancouver, Canada, and numerous locales around the globe. TED2017 is being held April 24-28, 2017. 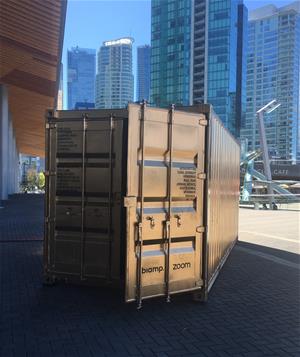 Shared_Studios, the global arts collective behind the public art initiative, Portals, is partnering exclusively with Biamp to elevate the quality of audio used across the Portals network. Through Biamp's Devio technology, participants in various Portals experience conversations as they unfold, providing a real-time, real-life experience. This enables people at different points on the planet to seamlessly create, collaborate, and play as if they’re in the same room together. 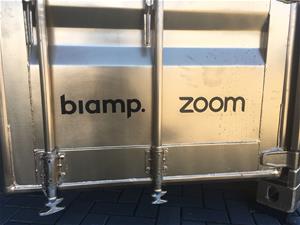 Shared_Studios is proud to work with Biamp – an industry leader in the pro-audio/video industry – to ensure all Portal conversations, interactions, and performances are heard and felt, from Herat to Honduras, Berlin to Brooklyn, and beyond.

Portals are gold shipping containers equipped with immersive audio-visual technology. When you enter one, you come face-to-face, live and life-sized, with someone in an identical Portal somewhere else in the world. Since launching in 2014, Portals have expanded to more than a dozen countries and have connected more than 35,000 people around the world in intimate, one-on-one dialogues. Prior Portals participants include Barack Obama, Ban Ki-moon, Haidar al-Abadi, John Kerry, Samantha Power, Sergey Brin, Fareed Zakaria, Ewan McGregor, and many more.