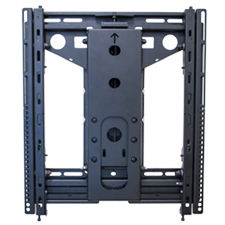 Portrait-orientated LMVSP meets ADA compliance with 1.98” of space from the wall in the closed position

Fullerton, CA (March 10, 2015) – Premier Mounts®, an internationally known leading manufacturer of innovative audio visual mounting solutions, today announced a March 20, 2015 release date for their LMVSP Press & Release™ Pop Out Ultra-Slim Mount in Portrait Orientation. The LMVSP is a portrait oriented, ADA-compliant video wall mount designed to reduce your Total Cost of Ownership with Premier Mounts’ engineered and industry's first Press & Release™ feature that gives the user service access in under 5 seconds.  The kickstand feature also gives 7° of clear access to the rear of the display. Panels can be easily aligned with the convenient and accessible x,y,z axis adjustments located on the top adjustment brackets.

“The LMVSP is a great addition to our existing line of LMV Press and Release™ Pop Out mounts,” says Wayne Kozuki, Product Manager, Premier Mounts, “the 1.98” space between the mount and the wall provides the ADA compliance of our LMVS in a portrait orientated position, which offers an ultra-low profile to the display and is perfect for a variety of applications.”

Public space coding demands ADA-compliance, requiring 4" or less of space between a display and the wall it mounts to. The new LMVSP Press & Release™ Pop Out Ultra-Slim Mount in Portrait Orientation meets this compliance by mounting displays 1.98” from the wall for portrait-oriented displays, typically ranging from 37-65” and weighing up to 100 lb./45.4 kg, which maintains an ultra-low profile for a variety of recessed wall or picture-framed digital signage applications.

The LMVSP Press & Release™ Pop Out Ultra-Slim Mount in Portrait Orientation cuts down on service call times with the industry's first Press & Release™ technology that is engineered by Premier Mounts, which is designed to offer service access in less than 5 seconds with a gentle press to the display, without the removal of the display. A service-position kickstand props the display at an accessible 7° angle for additional ease of access during display maintenance. The LMVSP also features a Single Top-Engaged Hook to allow for one-point latch and hang display mounting, rather than using complicated two-point straight-in placement.

Cut Installation Time and Save Money with Value-Add Features

The x,y,z axis adjustments on the top adjustment brackets allow for easy panel alignment, after which the mount can be locked in place using the security locking screw. The LMVSP scissor-design with compact mounting arms can be extended 10"from the wall with one smooth motion, and the “click-it” locking feature confirms the display is secure through an audible sound once the mount is fully retracted.

Related Products
Press & Release Pop Out Ultra-Slim Mount in Portrait Orientation
Model: LMVSP
You must be logged in to add more than four items to your comparison list.
Register today!
With a free My-iQ account, you'll be able to keep track of the latest updates and event notifications from your favorite AV manufacturers, manage your own projects and discover new pro-AV products.
register now
close
Thank you!
Someone will be in touch with you shortly.
Contact Design Sound NW, Inc.
close